Dutch brewer Heineken has launched Ignite, the world’s first smart beer bottle, which can interact with other Ignite bottles, its environment and the people around it. The interactive bottle uses microsensors and wireless networking technology to sense the moment when a bottle is being used to say ‘cheers’.

The bottle can also actively respond to the music and the output of specific audio and data cues. For example, it can detect various motion types such as toasting, drinking and sitting idle on the bar top. The motions trigger certain light effects lighting up the complete bottle, enhanced by the swirls of beer, carbon dioxide and oxygen. 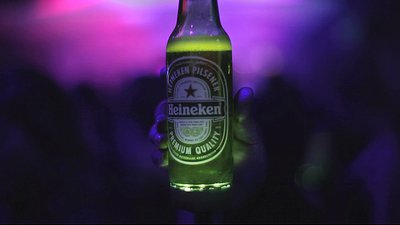 In addition, the bottle lights can be remotely activated, so that each bottle becomes an active light source controlled by specially developed VJ software, allowing synchronisation of bottles to music.

The housing under the bottle holds a custom-designed circuit board based around the open source Arduino hard- and software platform. It features eight bright LEDs, an efficient 8-bit microprocessor, an accelerometer to detect various motion types and a wireless network transceiver to communicate with the outside world. The 3D printed housing (designed and developed by product design firm C10) is made of two parts, allowing the unit to be re-used on multiple bottles of beer.

The Heineken Ignite project aimed to develop an idea that would create a memorable Heineken experience that unlocks the power and possibilities of mobile innovation and technology. 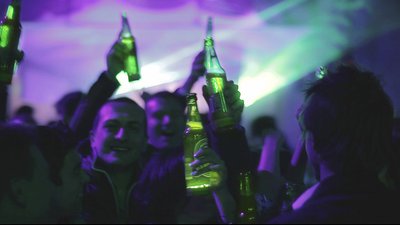 Heineken believes that mobile innovation could offer a much more rewarding experience than just an app and embraced the challenge to think about how the product could be leveraged as an interface to the brand experience. A prototype of the product was revealed 9 April at Milan Design Week as part of Heineken’s Lounge of the Future concept.

The first prototype was clunky and still separate from the bottle itself, but it was used to demonstrate that the basic idea works. The next challenge was to minimise the hardware. Fifty individual components needed to seamlessly work together. With a custom-designed board, the tech team managed to reduce the size of the whole board to just larger than a €2 coin. The boards need their own custom casing, so the team from C10 started developing 3D printed designs that would hold the boards. The casing had to meet a host of requirements - it should be unobtrusive and stylish, made from a material that allows rapid manufacturing, should withstand cooling and house both board and battery. 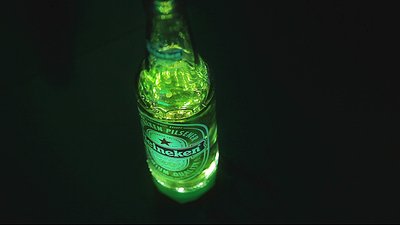 The team figured out a way to split the case design into two parts, one dummy part which is attached to the bottle and is disposable, and another which can be screwed on that holds all the electronics and the battery. This needs to be done just prior to serving because the cooling in the refrigerator plays havoc with battery life. The team eventually decided to hide the battery underneath the board, making the packaging less obtrusive due to the design, shape and colour. Several prototypes later - when software, hardware and casing design come together - Heineken had the final prototype of the world’s first interactive bottle ready.

The launch in Milan provided Heineken with information on how the prototype would perform in a real-life environment. The concept is being optimised and, based on the success of the prototype launch, Heineken is now rolling it out in nightclubs in seven of its top 25 markets before the end of the year. The 2.0 version of Ignite has also already been identified and worked on for 2014.