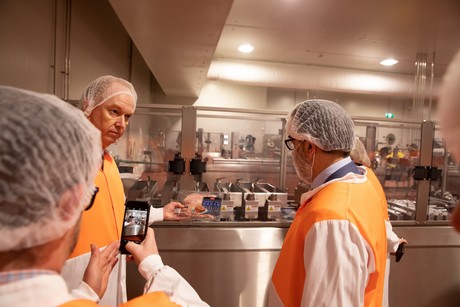 D’Orsogna Limited has commenced production at its $66 million food manufacturing facility in Victoria. The 11,000 m2 facility was officially opened at Merrifield Business Park by Victorian Minister for Jobs, Innovation and Trade Martin Pakula.

While providing employment for 200 people at the facility’s new production base in Victoria, D’Orsogna’s headquarters will remain in Palmyra, Western Australia, where the company employs a further 550 people. Having first opened a family butcher shop in Perth in 1949, D’Orsogna now produces a range of cured and cooked whole and sliced hams, gourmet continental goods, bacon and cooked sausages.

Addressing the opening function, Managing Director Greig Smith, asserted that the new manufacturing facility has established the D’Orsogna name, brand and products on the east coast.

“We’ve taken a measured approach to such a substantial investment after establishing a modest footprint in Victoria 10 years ago at Mt Waverley. The new Merrifield production facility will secure the future of the D’Orsogna business,” Smith said. Speaking at the opening of the facility, Smith also acknowledged the financial contributions made towards the new facility by the Victorian Government and City of Hume. 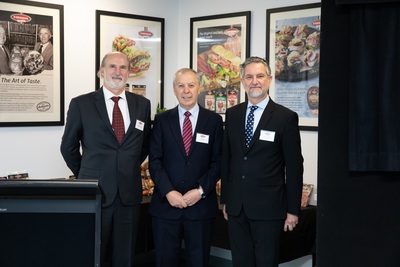 “We commit today to repaying that investment by the state and local community with this first-class food manufacturing business that already employs local citizens and delivers environmentally, socially and financially,” Smith said.

Minister Pakula said the Victorian Government supported the expansion by D’Orsogna, bringing jobs to Melbourne’s north and providing opportunities for export and growth in a vital food and fibre sector, valued at $14 billion.

The new facility is expected to double D’Orsogna’s production capacity and generate development opportunities for its range of ham, bacon and other meat protein products.

“Proximity to major local and export markets, streamlined manufacturing processes and state-of-the art equipment, all supported by well-trained staff, a committed management and board, and supportive customers, should ensure its success,” said Tony Iannello, D’Orsogna Chairman, adding that the company had “ambitious expansion plans over the next few years”.

The facility has increased productivity per square metre and incorporated modern energy and water conservation technology, for sustainable and efficiently processes to provide fresh meat protein products to consumers. The facility also features 8500 m2 of rooftop solar with a one-megawatt system to reduce on-site carbon emissions.

Wiley set to visit the future of food production at foodpro

Wiley will be sharing its insights on the future of food production at foodpro 2021 in Sydney...

Protecting networks and facilities against a fast-changing threat landscape