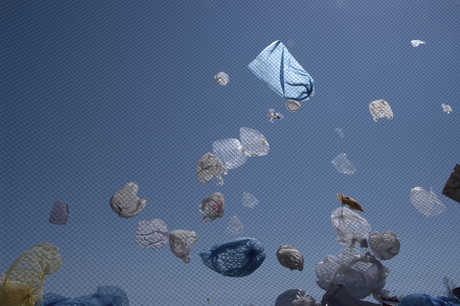 The development of sustainable packaging has been widely researched, with scientists, environmentalists and even students thinking up ways to combat the environmental issues caused by plastic waste.

Fifteen-year-old Angelina Arora from Sydney Girls High School began investigating bioplastic after she was asked to pay for a plastic bag at a shop. This encouraged her to research a convenient and environmentally friendly alternative to plastic bags.

“I was always a curious child asking why things work, and this developed into a love of science. I believe science is the key to all the world’s mysteries,” said Arora.

What began as a hobby and passion has now gained her international recognition. Arora won the NSW Young Scientist Awards in 2016 for creating a plastic made with cornstarch — but although this was biodegradable in water, it was not a practical solution. However, it led to her working alongside a CSIRO mentor to create a biodegradable plastic made from prawn shell and sticky protein from the silk of silkworms.

Arora compared the protein with a spider’s web and stated that when mixed with chitin, it produces a flexible yet strong fabric.

“I’m driven by wanting to help — whether it’s people, the environment or animals. It was amazing after months of research that I found a plastic that was suitable,” she said.

Several finalists from these awards, including Arora, will go on to represent Australia at the Intel International Science and Engineering Fair (ISEF) in Pennsylvania, being held from 13–18, May alongside over 1800 high school students from 75 countries, regions and territories. Others include Caitlin Roberts, Kavinya Welikala, Ella Cuthbert, Cassandra Dods, Ashley Cain and teacher winner Adele Hudson.

CSIRO Education and Outreach Director Mary Mulcahy said science, technology, engineering and mathematics (STEM) are constantly developing, and Australia’s ability to adapt with it will be shown through the Australian projects at ISEF.

“These students are showing on a world stage that Australian students are prepared more than ever for the future,” Mulcahy said.