Already a certified organic and biodynamic vineyard, Cape Jaffa Wines has responded to its customers’ expectations and committed to going ‘green’.

Being away from the national three-phase power grid meant that the winery relied on load matched diesel generators for their three-phase power requirements. The winery office and cellar door were already solar powered but it had been thought that using solar power for the seasonal use of the winery equipment and refrigeration during vintage would not be economically viable. Another issue was ensuring return on investment when, as the winery is off-grid, there is no opportunity to sell any excess power back into the system. Applications for government grants for renewable energy had been unsuccessful because of these unique circumstances. However, as the costs of both solar and battery storage have reduced the business case has changed.

Cape Jaffa has now installed 297 solar panels on the winery roof with a capacity of 81 kW and 96 400 Ah lithium battery cells. This is expected to create an emissions savings of about 60 CO2e/year. 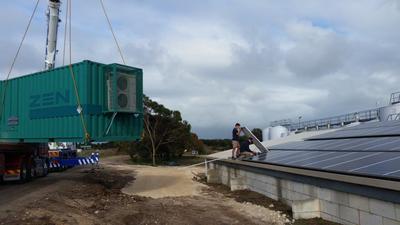 To better understand energy efficiency, Cape Jaffa went through the process of a detailed energy audit. Although the audit was supported by a government grant, there was no funding available to invest in the improvements recommended. Reducing usage, and in particular peak loads, became the focus and substantial savings were achieved through a number of changes to the process.

The winemakers began co-inoculating for secondary fermentation to reduce requirements to warm wines and also moved away from traditional cold stabilisation. The expectation is that the new system will run carbon neutral operation for nine months of the year and a diesel back-up generator will occasionally be needed to top up the power supply during vintage.