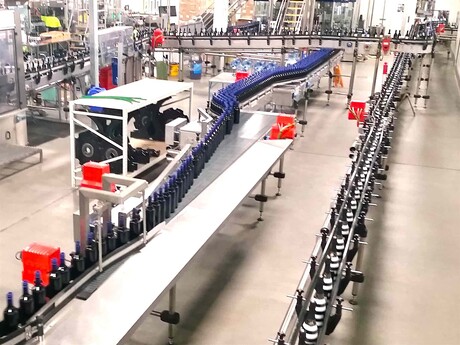 Taking the time to plan and prepare has paid dividends for this winery, after a re-design and refit of its bottling plant. Completed in only eight weeks, the upgrade required new drives for the bottle-conveyor system, plus the addition of air conditioning and hospital-grade air filtration. The result? Three years on, productivity is up by 50% while energy consumption is down, despite the power requirements of the additional equipment.

At a time when energy costs continue to spiral upwards, saving energy is not just good for the environment. It is just as important for the commercial bottom line. According to Jesse Auricht, Engineering Manager, Yalumba, decisions taken when planning the upgrade have turned out well in both regards. He says the choice of energy-efficient SEW-EURODRIVE MOVIGEAR® mechatronic drive units to keep the conveyor lines and bottles moving contributed significantly to this positive outcome.

The winery is serious about reducing energy costs, and monitors energy consumption continuously. Auricht says that typically half the cost of energy is based on network charges, so it is important to avoid any spikes in consumption as the wine bottles are filled, capped, labelled and packed in the bottling plant. “In the energy market, 50% of your cost can be dictated by a half-hour event,” he says. “If you hit that peak once, depending on the time of day, you’ll see an ongoing energy cost increase.”

John Gattellari, National Industry Specialist – Food & Beverage, with SEW-EURODRIVE, says the MOVIGEAR units are carefully designed to minimise the use of electrical power and help manufacturers make savings. MOVIGEAR complies with efficiency class IE4 (Super Premium Efficiency) and reduces energy costs by up to 50%, due to the high efficiency of all its components. 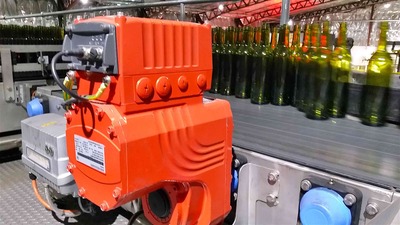 Once it was clear that the plant needed refurbishing, Yalumba decided not to rush in. Instead, they embarked on a precision planning exercise that led to a completely redesigned system. Starting with their own design concepts, they issued a tender for detailed design and implementation of the project, and awarded it to Foodmach, a specialist Australian provider of machinery-design, manufacturing and control services.

Working closely with Yalumba, Foodmach designed and installed the new conveyor and line control system. The revamped system consisted of the original bottling line with new controls, a new conveyor and new palletisers, and a second line with a new de-palletiser, filler and packer.

A radical new layout of the two conveyor lines meant that all the operators would be working in a shared space, so they could help each other for changeovers and other tasks.

SEW-EURODRIVE’s engineering and customer service together with the energy efficient MOVIGEAR mechatronic drive system and high precision servo motors and MOVIDRIVE controllers were fundamental in obtaining the desired result.

In addition to saving costs by reducing energy consumption, the upgrade led to a safer work environment, as forklifts no longer enter the bottling operator area. Instead, because of the improved layout, the bottles are palletised outside the main bottling area, away from pedestrian traffic.

The upgrade also provided an opportunity to solve an engineering challenge in the labelling area. Labels on wine bottles need to look good. If the corner of a label is lifting slightly from a bottle on display, the consumer may select a different bottle.

One of the problems for wine bottlers is condensation build-up in the labelling area due to the prevailing dew point temperature. If the wine temperature is lower than the dew point, there is a likelihood that the labels won’t adhere properly. To overcome this, Auricht and his team introduced an enclosed air-conditioned room around the bottling area, set to the correct dew point. At the same time, they introduced a positively-pressured, hospital-grade filtration system to maintain clean conditions.

“It was a large investment for something that might have seemed trivial at the start but, in hindsight, everyone is rapt with the decisions that were made. We look back now and don’t know how we managed without that room,” says Auricht.

While solving the dew point problem for better labelling conditions, the fully enclosed air-conditioned room introduced additional noise. “By effectively putting it in a big esky, all the noise in the bottling area was amplified,” says Auricht.

The issue of noise is significant, especially given the running speeds of the conveyors. Line 2, which is used for wine only, runs at 12,000 bottles per hour. “You get glass bottles banging into each other at that rate and it’s noisy — and potentially dangerous as well,” he says.

Trevor Burgemeister, Process Control Technician at Yalumba, says that to alleviate the noise and danger of uncontrolled collisions, the system has been designed to detect when bottles are about to collide. When this happens, it sets a maximum collision speed.

Auricht says that to achieve this, the drives need to be accurate, reliable, efficient and controllable. As for the noise component, he says that the MOVIGEAR is so quiet it’s negligible in comparison to the rest of the system. These characteristics, along with past performance and a strong relationship, were major factors in the choice of SEW-EURODRIVE. “They have been a solid partner of ours for a long time. It’s a recognised brand and we’ve had a lot of success,” he says.

Key to reducing the noise is creating a ‘pressure-less line’. In this case, pressure refers to the accumulation of bottles at any point on the conveyor system, and not to the pressure of the wine within the bottle. It occurs when the conveyor is transporting more bottles than the individual machine process rate. If a processing machine for filling, capping or labelling is operating at a slower speed than bottles are being delivered, the bottles bump into each other, and that familiar sound of glass against glass can be heard. On a grand scale, though, it’s not a pleasant clinking sound that you might hear in a restaurant. At a rate of thousands of bottles per hour, it’s more of a cacophony.

Auricht says that if the conveyor keeps running when this happens, the pressure continues to build up. This means energy wastage, inefficiency and noise, along with wear and tear on all the conveyors.

On Line 1, which is used for many different bottle types ranging from sparkling wine with a cork to table wines with screw tops, the flow is between 5,000 and 9,000 bottles per hour. While the aim is zero pressure on the conveyors, the processing machines require a degree of pressure to function correctly. To achieve this, the conveyors on this line run at set speeds, while the line’s process machines vary their speed as necessary to maintain head pressure of between five and eight bottles.

In the Foodmach line control system speeds are controlled by software programmed according to a ‘recipe’ that varies for each production variety. The recipe specifies which processing machines are required for the product and also their operating parameters. Recipe data — speed, diameter of bottle, gap between bottles and the like — is communicated from the programmable logic controller (PLC) to the SEW-EURODRIVE gears and units. These are calibrated so that the speed of the conveyor is set correctly. Burgemeister says that connecting the motion-detecting sensors to the motors and gear units, in order to manage the flow of bottles, was a simple operation. “It was just a matter of plugging the photoelectric in,” he says.

If further calibration is required during production, or if pressure build-up does begin to occur at one of the process machines, the conveyors are progressively halted to correct the situation. At the same time, the machine will be instructed to operate faster, so that the flow evens out again.

Gavin Alder, Foodmach’s Controls Manager, says: “An added benefit of such fine line control is the ability to run reverse taper bottles (bottles wider at the shoulder than the base) which traditionally are difficult to run at speed, as bottle collisions result in fallen bottles.”

Correct flow is set up at the start of the operation on the Foodmach de-palletisers, where thousands of bottles per hour are fed into the two bottling conveyor lines. At this point, several ‘mini’ conveyor lines, running side by side and at different speeds, cause bunched-up groups of bottles to be fed into a single line. Complex programming, communicated to each MOVIGEAR drive in the system, makes the operation look easy. For Auricht, this is what good engineering is all about. He describes the process with a single word: “Poetry.”

According to Gattellari, the compact design of the MOVIGEAR is optimised for horizontal conveyor systems like these. “The motor, gear units and electronics are combined in a single mechatronic drive system,” he says. “It caters for a range of communication systems, single line network installation (SNI), SEW system bus controller (DSC), binary (DBC) or AS-interface (DAC).”

Taking it to the world

A flow-on benefit of the well-planned upgrade has been preparedness for recent tightening of international quality standards in the wine industry. Because of the upgrade, the plant has continued to achieve positive audit outcomes, resulting in consistent export sales for this important Australian industry.

“This was probably one of our most successful projects undertaken — both in timeframes and outcomes,” says Auricht. “In the scheme of things, the premium for the high-efficiency, low-energy drives was not that much and, looking back on it now, it absolutely was the right decision.”

Australian consumers have key features in mind when biting into a burger and want the right...

In chemistry, chromatography refers to all those physico-chemical separation processes in which...

Interface have provided sensors for industrial automation solutions to thousands of customers...