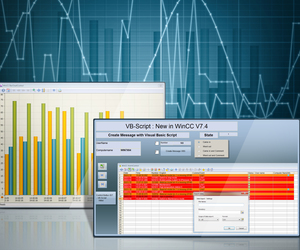 Siemens has launched the SIMATIC WinCC SCADA V7.4, which focuses on greater efficiency and openness. Suitable for the food and beverage, water and wastewater and general manufacturing industries, the platform enables access of data to facilitate informed and quicker decision-making. The platform helps users in these industries access control systems in a robust, widely accessible and secure fashion.

The WebUX option, for web-based operator control and monitoring, uses widely available HTML5-compatible smart devices and has been considerably extended in functionality. For example, WebUX now supports all important controls, such as alarming and gauges, and enables objects to be made more dynamic by means of VB script.

The controller channel has been extended to allow up to 128 S7-1500 controllers per server. In addition, a standard OPC UA client has been integrated to exchange data with third-party systems. For the exchange of data (iDoc) with MES (manufacturing execution system) and SAP systems, the WinCC IndustrialDataBridge option has been extended to include an XML file-based interface.

Various functional expansions increase engineering efficiency. For example, drag and drop between the Configuration Studio and Graphics Designer is possible, in addition to extended search and replace functions. Bulk data can be processed by means of a VBA (Visual Basic for Applications) interface. At runtime, trend and bar-chart controls have been expanded to include intuitive multitouch gesture control, such as zooming and panning.

I am interested in Siemens SIMATIC WinCC SCADA V7.4 . 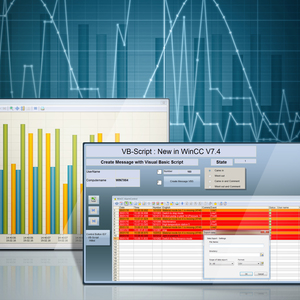