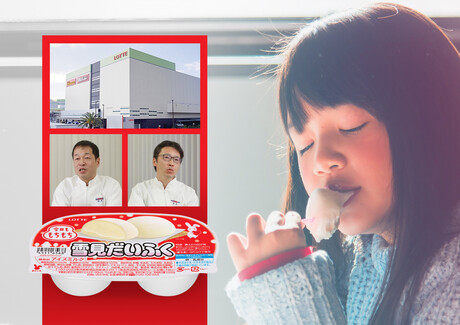 However, as production increased, achieving the consistent texture, quality and taste that the product is known for became harder to maintain. To solve this challenge Lotte has introduced Mitsubishi Electric’s e-F@ctory to the production of Yukimi Daifuku.

“Before introducing e-F@ctory, there was an issue of inconsistency of the rice cake quality,” said Hiroshi Sugimoto, Manager of the Facilities Department at Lotte’s Urawa Plant.

“When wrapping the ice cream, the hardness of rice cake used to vary depending on the temperature and water content. Some operations were dependent on people, and losses arose out of the need to finely adjust the machine parameters,” he said.

“The e-F@ctory system allows us to conduct improvement activities such as enhancing the operating rate, stabilising quality and optimising staffing for production activities. The extendibility of the system, depending on what we want to do, was also appealing.”

At each of the Yukimi Daifuku production lines, the state of the product and the operating status of the machines is collected by PLCs installed in each process. Vast amounts of data, such as vibration data from the rice cake hopper to data from the conveying inverters, is collected. All of the data can be understood in real time, not only through the overall SCADA monitoring system installed in the control room but also through on-site computer displays.

“By introducing this system, data became centralised, making it possible to view and investigate conditions whenever we want,” said Hiroshi Akimoto, Section Manager of Facilities Department at the Urawa Plant.

“Because the data volume is extremely high, having all the data centralised in one place has a positive effect. One big benefit is that we can now gather and analyse data and conduct data diagnostics using a real-time data analyser. This system not only helps us stabilise the state of the rice cakes used for the Yukimi Daifuku, but also promotes improvement activities within the plant.”

Akimoto said another benefit is the adjustment of the blending ratio of rice cake and ice cream.

The process was previously done by experienced operators, who monitored the state of the rice cakes as they came out of the wrapping machine by kneading them with their fingers.

“We thought it would be great if we could automate this process. By automating such processes, which were conventionally performed based on human senses, and by capturing signs of any poor quality of the wrapped rice cakes beforehand, we can eliminate problems. That was our ultimate goal.” 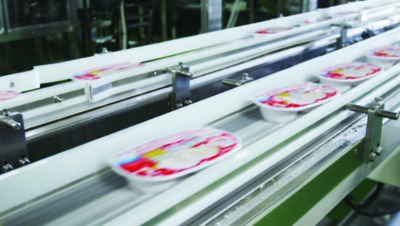 “This technical aspect of combining a cold item with a warm one in a good balance is what makes Yukimi Daifuku a complex product. But I think this challenge is something that inspires us to find new ways to overcome it,” Manako said.

“The temperature in the manufacturing room varies all year round. We strive to maintain consistent conditions, but at the same time, we try to create even better conditions. We introduced the e-F@ctory manufacturing concept with the expectation of realising this in the future.”

Manako said in the course of daily production, machines do not operate in the same condition every day as experienced staff members checked and adjusted the settings of the machines.

“With e-F@ctory, we can visualise the condition of machines, and the machines themselves can issue instructions to make adjustments. Another thing is that maintenance and failures are unavoidable with machines. We expect that these can also be better managed by using e-F@ctory’s symptom management features.”

The use of IoT has only just been introduced to the production of the rice cake dessert; however, the Urawa Plant has many other lines making chocolates and ice creams.

Manako said his team aims to horizontally deploy this system and construct a smart plant in which ‘symptom management’ and ‘operating rate improvement’ are implemented on numerous lines.

“Stable plant operation and manpower savings will eventually make a major contribution in terms of costs and so on. If we consider Lotte as a whole, our goal is to evolve this technology further and extend it to other plants.”