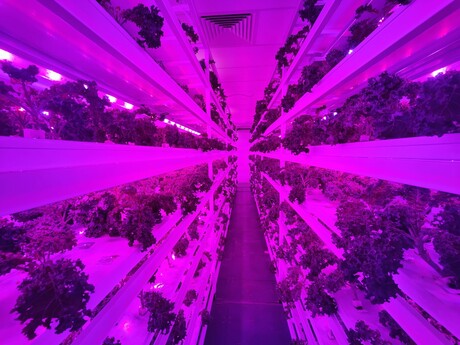 Based in Singapore, Sustenir Agriculture grows vegetables in a high-rise indoor farm that uses no pesticides and is claimed to generate 92% less carbon emissions than imported produce and consume 95% less water than conventional farming on arable land. In order to reduce operating costs and automate some of its processes, the company turned to TOMRA Food for an optical sorting machine.

The farm grows leafy baby vegetables in a commercial development, splitting its operations across four storeys of an industrial building. Kale, curly kale, spinach, rocket and lettuce are grown in this location and sold without the need for washing, as soil is not used. An optical sorting machine was adopted so that foreign material such as bugs, foam and fragments of plastic could be detected, as well as natural defects on the leaves, without the manual sorting procedure that had previously been used.

Due to the growing operation being situated in a high-rise building, the equipment had to be constructed by TOMRA in halves and then assembled and calibrated onsite. The machines were set up to detect and reject foreign materials and unsightly leaves. 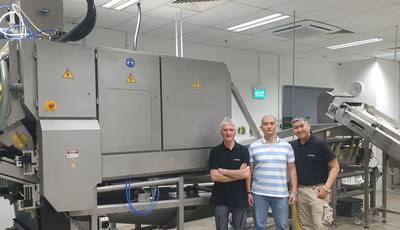 To minimise food waste and maximise revenue, the food sorting machine was set up to split the product into two grades, by twice sorting the crops. The first pass picked out the best products to be sold for retail, rejecting anything that was misshapen, holey or had off colours. For the second pass, vegetables suitable for selling in restaurants were sorted by rejecting any brown leaves but accepting leaves that were up to 20% yellow or were misshapen or had holes. Anything rejected in this stage was composted. This process meant that a high percentage of the company’s crops were used in some capacity, thus reducing waste.

“We’re delighted with the effectiveness of TOMRA’s sorter and with the financial payback,” said Sustenir’s Lawrence de Leon. “Investment in machinery typically takes more than three years to deliver a full return on investment, but with TOMRA’s machine, ROI will be achieved in less than a year. We will be investing in more TOMRA sorters as part of our expansion.”