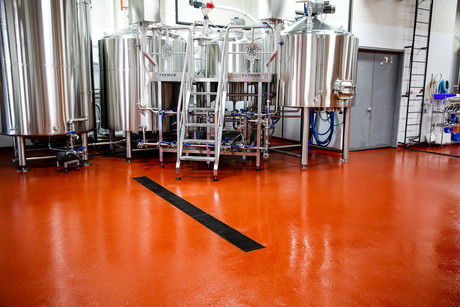 When founding the Pale Fire Brewing Co. in the US state of Virginia, head brewer Jamie Long knew a robust floor would be essential to withstand the challenging demands of high-quality craft beer production.

The site he’d chosen for his business was an 80-year-old building that was in the process of being renovated. However, the existing floor was unsuitable for the thermal shock, chemical spills, heavy pallets, dropped kegs and slippery conditions inherent to a brewery.

Long undertook extensive research into the best flooring solution and visited a neighbouring brewery, where he reviewed the Flowfresh floor to see how it coped with the on-site challenges.

Flowfresh is an HACCP International Certified, cementitious urethane system manufactured by global resin flooring manufacturer Flowcrete. The product was compared to several alternative materials before being specified for the project.

“I knew we needed floors that would be able to handle the stress from brewery operations. The floor has held up remarkably well in the seven months we have been open … and we are constantly complimented on the cleanliness and professional look of the floor.”

Prior to applying the coating, concrete was poured in the brewing areas to ensure that the floor would be able to handle the weight of the heavy equipment. The floor was also sloped so that any liquids would flow into the newly installed trench drains.

Approximately 232 m2 of Flowfresh SL was laid down in the production area, bottling line and storage rooms. A topcoat of Flowfresh SR Sealer was then applied to complete the floor’s seamless, impervious and durable finish.

As customers in the Pale Fire Brewing Co.’s stylish Tap Room would be able to look into the production area, it was important that everything in the brewery was both functional and aesthetically appealing. A contemporary, dusky red colour was chosen for the floor.

The incorporation of the Polygiene bactericidal additive was particularly appealing to the Pale Fire Brewing Co. The silver-ion based additive is homogeneously distributed throughout the Flowfresh material to complement regular floor cleaning and hygiene practices. Flowfresh samples have been evaluated to the ISO 22196 test method, which measures a surface’s antibacterial effectiveness on plastics and other non-porous surfaces.

Slips and trips were another key brewery concern, as spillages of beer, by-products and ingredients during the brewing process can all become dangerous hazards. The floor was installed with a full broadcast of aggregates to help avoid such accidents by enhancing traction underfoot.

The brewery’s owners had initially decided against a cove base; however, the application contractor convinced the client during the shotblasting process of its advantages. Since opening, Long has been impressed with how much easier the coving makes it to wash the site.

“There are always small pieces of grain in the brewhouse after a brew day and the cove makes it much easier to spray around the perimeter to send it to the drain. Without the cove, grain and dirt would likely get trapped at the 90-degree edge of the floor,” explained Long.

Being unable to clear away contaminants could leave a brewery vulnerable to being compromised by dangerous microbes. The ability of Flowfresh to effectively minimise the potential for contamination incidents in food and beverage manufacturing facilities led to it being awarded HACCP International Certification.

The HRS BP Series Piston Pump can handle delicate foodstuffs without damage, while working at...

The Atlas Copco VSD+ app allows a range of vacuum pumps to be controlled and monitored in real...