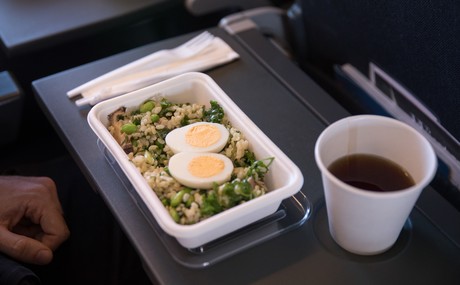 Eco-friendly packaging company BioPak has partnered with Australian airline Qantas Group on a zero-waste flight from Sydney to Adelaide.

About 1000 single-use plastic items were substituted with sustainable alternatives or removed, including individually packaged servings of milk and Vegemite. Some of BioPak’s products used during the flight include food containers made from sugarcane pulp, cutlery made from crop starch and cups made from plant matter. BioPak’s certified compostable packaging will also be commercially composted in Adelaide.

“We are delighted to team up with Qantas Group in what is an unprecedented step forward in fighting the war on waste,” BioPak CEO Gary Smith said.

“This is the most ambitious waste reduction target of any major airline globally, and we are truly excited to be at the forefront in providing state-of-the-art, eco-friendly products that solve the impending issue of single-use plastics.”

The flight, which is claimed to be the first commercial flight to produce no landfill waste, forms part of Qantas’s plan to cut 100 million single-use plastics by the end of 2020 and eliminate 75% of the airline’s waste by the end of 2021.

“In the process of carrying over 50 million people every year, Qantas and Jetstar currently produce an amount of waste equivalent to 80 fully laden Boeing 747 jumbo jets,” David explained. “We want to give customers the same level of service they currently enjoy, but without the amount of waste that comes with it.”