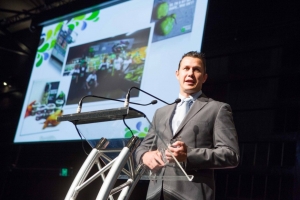 Harris Farm Markets has been awarded the PMA-Produce Plus Marketer of the Year Award 2015 for its Imperfect Picks ‘ugly fruit’ marketing campaign.

The Imperfect Picks product range was launched in late 2014 and set out to bring the issue of food waste to the public’s attention by highlighting the staggering percentage of fresh produce that does not leave the farm gate, simply because it does not meet the strict aesthetic specifications of food retailers.

Imperfect Picks was singled out by the judges as a pioneering, integrated and impactful campaign.

“We’d like to congratulate Harris Farm Markets on this outstanding campaign,” said John Hey, managing editor of Produce Plus. “The speed and quality of execution were impressive, and Imperfect Picks has created an exciting marketing outlet for that significant portion of a grower’s crop that does not meet retailers’ aesthetic standards. At the same time, the campaign has helped to actually grow fresh produce consumption.”

Co-CEO of Harris Farm Markets Tristan Harris (pictured above) said winning the Marketer of the Year Award would spur the company on as it geared up to further expand the initiative.

“Harris Farm Markets is really excited to win the PMA-Produce Plus Marketer of the Year Award for Imperfect Picks,” said Harris after collecting the accolade.

“The campaign has been amazingly well received by our customers, and our growers have been thrilled with the ability to move previously unmarketable product. With a big milestone in terms of volume sold coming up and this award now to spur us on, we are going to redouble our efforts to drive this campaign forward. Stay tuned for Imperfect Picks 2.0!”

The award was announced at the PMA Fresh Connections conference and trade show in Melbourne.