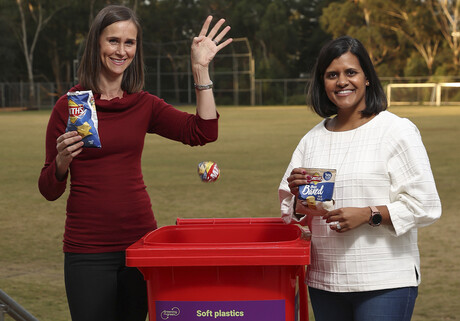 PepsiCo ANZ has announced it will move to 100% recyclable packaging across its entire snacks range which includes brands such as Smith’s, Red Rock Deli, Sakata and Dorito.

The Australian food FMCG business has also launched Greening the Green, a partnership with Clean Up Australia, REDcycle and Replas aimed at increasing soft plastic recycling across the country.

With final snack packaging design changes underway, the snack packaging will be able to be recycled by the end of the year via home kerbside recycling for cardboard and plastic trays, and REDcycle collection bins for soft plastic packaging.

“We are proud to have achieved the first step — designing 100% of our snacks packaging to be recyclable — meeting Australia’s 2025 National Packaging Target four years ahead of schedule,” Pandey said.

The final packaging update will also see 100% of PepsiCo’s snack packaging carry the Australasian Recycling Logo (ARL) by the end of the year.

Clean Up Australia Chair Pip Kiernan said the program will show Australians that the soft plastics we take for granted as packaging can be transformed into items the community can use. “It’s recycling in action.”

The initiative will work with 110 local sporting facilities over the next three years to deliver a 12-week program which aims to educate consumers on the importance of soft plastic recycling and improve littering and rubbish collection via an interactive online learning experience.

Soft plastics will be collected by REDcycle, shredded and delivered to Replas, where they will be moulded into community equipment such as bollards, signage and seating.

Once the 12-week program has been completed, each sporting facility will be gifted a new piece of equipment made from the recycled soft plastics.

Cadbury to transition to recycled packaging

Lion to shrink its plastic usage on beer packaging

Australasian brewer Lion has pledged to eliminate plastic shrink-wrap from beer packaging within...

The Australian Institute of Packaging (AIP) has released a series of case studies about...