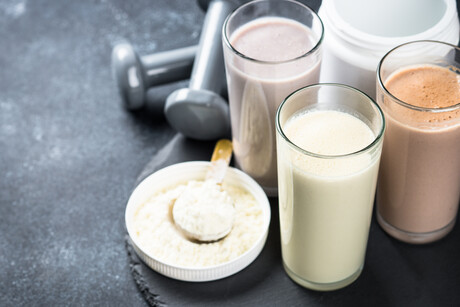 SMK Nutra Makers (SMK), a formulator and contract manufacturer of dietary supplements and nutritional products, improved production of a protein shake sports drink by switching from manual dumping of a powdered chocolate mix from an elevated safety cage to dumping of the mix at floor level into mobile flexible screw conveyors.

Previously, operators in a safety cage were raised by a forklift to dump 25 kg bags of the shake powder into either of two screeners positioned above blenders.

To improve the laborious, dusty procedure, the company purchased two mobile, high-capacity flexible screw conveyors, each dedicated to a separate blender. The powder is now dumped at floor level into the hopper of a conveyor, which feeds a screener and, in turn, a blender. SMK owner Avni Patel said: “Manual handling at floor level has increased productivity, eliminated dust and improved worker safety.”

Supplied by Flexicon, each of the BEV-CON model conveyors includes a 7.5 m-long bevelled-edge spiral driven by a motor positioned beyond the discharge point, precluding material contact with bearings or seals. 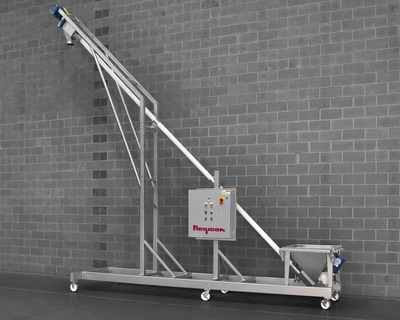 Castor-mounted frame with support boom allows rolling of the unit into position with discharge above the screener, and thereafter to a cleaning area.

A 3.6 m-high castor-mounted frame with support boom enables operators to roll the unit into position with the conveyor discharge directly above the screener, and thereafter to a cleaning area. Mobility of the units also provides SMK with the flexibility to satisfy new processes.

Patel said: “We also considered a solid shaft auger conveyor among other options, ultimately deciding on the Flexicon conveyors.

“The conveyors are precisely what we needed,” she explained. “We no longer have issues of dust, safety and fatigue when moving the chocolate powder. We’re in the process of expanding and will be ordering additional units.”