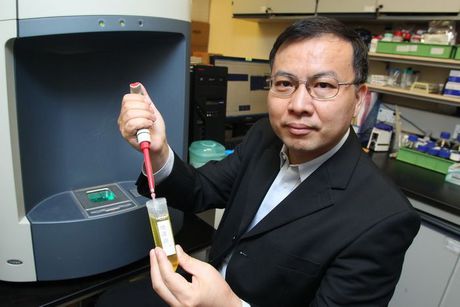 The emergence and widespread use of gutter oils in recent years has forced companies to authenticate the oils they use in their foods.

Gutter oil is a term used in China and Taiwan to describe illicit cooking oil which has been recycled from waste oil collected from sources such as restaurant fryers, sewer drains, grease traps and slaughterhouse waste.

Now the Food Safety and Technology Research Centre under the Department of Applied Biology and Chemical Technology of The Hong Kong Polytechnic University (PolyU) has developed a new method for rapid authentication of edible oils and screening of gutter oils.

The conventional analytical approach for edible oils is not only labour-intensive and time-consuming, but it also fails to provide a versatile solution for screening of gutter oils. By setting up a simple analytical protocol and a spectral library of edible oils, the new approach is able to determine the authenticity of a labelled edible oil sample and hence screened gutter oils within five minutes.

The conventional approach for edible oil authentication involves labour-intensive and time-consuming sample pretreatment and the subsequent chromatographic separation to separate complex sample mixture before mass spectrometric detection, a commonly used technology for identification and quantitation of chemical compounds. The whole process takes a few hours to analyse one sample.

On the other hand, identification of gutter oils mainly involves detection of certain food residue markers or toxic and carcinogenic chemicals in the sample. However, due to the vast diversity of gutter oils, and the fact that target compounds could be removed by processing, a universal strategy to screen gutter oils is not available at present.

PolyU researchers have developed a simplified method for direct analysis of edible oils using matrix-assisted laser desorption/ionisation mass spectrometry (MALDI-MS). In the new MALDI-MS approach, only simple sample preparation, automatic data acquisition and simple data processing are involved. High-quality and highly reproducible MALDI-MS spectra results can be obtained using this method, and a preliminary spectral database of labelled edible oils available in the market has been set up. Since different types of edible oils have different MALDI-MS spectral patterns, the authenticity of an edible oil sample can then be determined within five minutes by comparing its MALDI-MS spectrum with those of its labelled oil in the established database. Since this method is capable of authenticating edible oils, it also enables a rapid screening of gutter oils, given fraudulent mislabelling is a common feature of gutter oils.

The related paper has been recently published on Analytica Chimica Acta. The research team will establish a more complete MALDI spectral library of various edible oils in the coming two years and improve the library searching technique. In addition, more testing of edible oil samples with different MALDI-MS equipment will be carried out to further validate the new approach.