Can sunlight stop E. coli in its tracks? 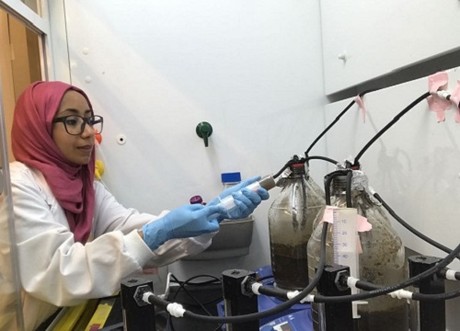 Increasingly virulent strains of Escherichia coli are circulating in wastewater around the world, and the race is on to find novel treatment processes that could help reduce the spread of these pathogens. KAUST researchers examined how three strains of E. coli found in Jeddah’s wastewater supply fared when placed under strong sunlight: they showed, while two strains were reduced, one strain persisted.

“Solar irradiation is used unintentionally in many places when treated wastewater is stored in an evaporation pond prior to re-use or when it is used to irrigate crops in daylight,” says Pei-Ying Hong, who led the project with PhD student Nada Al-Jassim and co-workers at KAUST’s Water Desalination and Reuse Center. “However, because this approach is unintentional, it is difficult to know how successful it has been. We therefore decided to analyse what happens to E. coli in wastewater under solar irradiation.”

Sunlight is known to kill pathogens in fresh water. In fact, as Hong notes, non-government organisations recommend that rural communities with no treatment for basic drinking water should store their water in transparent plastic bottles, and that they place these bottles in direct sunlight for some hours before consumption.

Hong’s team used a similar idea, preparing two reactors each carrying a strain of E. coli — a recently discovered, highly antibiotic-resistant strain called PI-7 and a common, non-virulent strain called DSM1103. These reactors were subjected to solar irradiation for 24 hours, while two identical reactors were stored in the dark as controls. The team took samples at regular intervals from the four reactors and analysed changes to the genetic make-up and the survival rates of each strain of E. coli.

“The viable cell counts of both strains reduced considerably, but E. coli PI-7 decayed at a slower rate compared to DSM1103,” said Hong. “Rather worryingly, and unlike DSM1103, PI-7 formed ‘persister’ cells in the later stages of prolonged solar exposure. This means a small portion of PI-7 cells can withstand solar treatment and regrow again when the environmental conditions become favourable.”

PI-7 defended itself against solar irradiation by upregulating genes related to cellular repair and oxidative stress, along with various virulence factors. However, during the genetic analysis, Al-Jassim noted with interest that genes carried by PI-7 to protect it from viruses were downregulated during solar irradiation.

Image caption: Nada Al-Jassim and co-workers conducted experiments to verify whether solar irradiation can be used to kill E.coli strains in wastewater. ©2017 KAUST

Some plant-based burgers smell like the real deal when they are cooking, though other products...

A look at the latest product launches hitting the shelves.