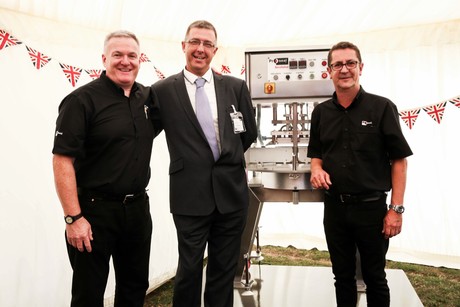 Tray sealing specialist Proseal UK has received the Queen’s Award for Enterprise: International Trade for its continuous growth over the last six years. The prestigious UK business award was presented by the Lord Lieutenant of Cheshire, David Briggs, at a special ceremony held at its headquarters in Adlington, Cheshire.

Proseal designs and manufactures high-quality automatic tray sealing machines, conveyor systems and sealing tools for the food industry and other applications. The event provided the opportunity for a photograph of the first tray sealer the company manufactured, the Proseal PR30, together with Proseal’s first customer, David Wright of Kershaw’s Frozen Foods.

David Rutley, MP for Macclesfield, said, “I extend my warmest congratulations to all at Proseal on this excellent and well-deserved award. It is clear that staff have made strong and dedicated efforts to expand the business, boosting the local economy and creating many jobs locally. I wish the company every success for the future.”

Proseal’s Queen’s Award for International Trade coincides with the company’s 20th anniversary and follows strong sales growth in both its home and export markets, increasing its number of employees from over 300 in the UK to 438 worldwide.

In the last year, this growth has culminated with its best performance in international trade. The Proseal USA and Proseal Australia subsidiary businesses, along with a growing network of 13 distributors, have helped the company gain 52% of sales in export markets in 2017. It also has strong business in mainland European countries such as the Netherlands, Ireland, Germany and Spain, and has developed new markets in Southeast Asia, China, Turkey, North Africa, South Africa and South America.

“It was a wonderful day and such a great honour to receive our Queen’s Award from the Lord Lieutenant in front of so many people who have played a key role in Proseal’s success over the last 20 years,” said Steve Malone, Proseal’s Director, who co-founded the business with Robert Hargreaves in 1998. “I wish to thank everyone who came and shared the day with us. People have always been at the heart of Proseal — that’s a major reason we won a Queen’s Award and it will be major factor in our success in the future as well.”

Also in attendance were Sarah Jane Gilmore, the Mayor of Poynton; David Moss of Adlington Parish Council; members of Proseal’s senior staff; Gari Wyatt, CEO of Proseal America; and guests from a number of the company’s customers, distributors and suppliers.

Upon completion, the business will continue to be run by the existing managing directors as part...

Despite the challenges of the pandemic, many confectionery brands are achieving growth on the...

The Chair of AgriFutures Australia has welcomed five new non-executive directors to the board.