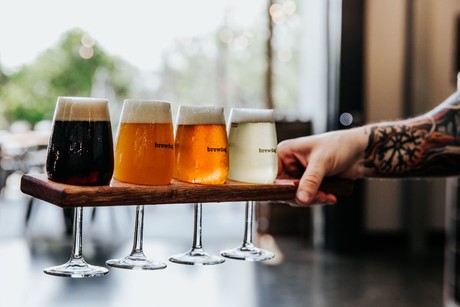 Scottish craft beer company BrewDog has opened its $30 million brewery and tap room in Brisbane. DogTap Brisbane will be BrewDog’s first brewery in the Southern Hemisphere, with the Palaszczuk government supporting the move through its $150 million Advance Queensland Industry Attraction Fund.

Member for Bulimba Di Farmer said the brewery and top room will create more jobs, while stimulating new opportunities for other small businesses.

“The Murarrie location right on the Brisbane River, combined with the craft brews and local food being served up, will make this a must-visit venue for our area,” Farmer said.

Craft beer production in Queensland is currently worth over $62 million annually, and on average each of the state’s 90 independent craft brewers employs around 20 Queenslanders. BrewDog was looking to establish a brewery in Australia, and opted to secure a multimillion-dollar investment for Queensland.

“When BrewDog started to look at establishing in Australia, the first thing we noticed was the exciting phase the Queensland craft brewing scene was starting to move into. Not only was the number of breweries exploding, but there were some knock-out beers being produced. With the help of the Queensland Government and the Queensland community, we look forward to welcoming brew lovers from far and wide to our world-class craft brewery and tap room at Murarrie,” said Calvin McDonald, BrewDog Australia Operations Manager.

Beers from local Queensland brewers including Range Brewing, Balter, Currumbin Valley Brewery, Black Hops, Aether and Brouhaha will be served alongside BrewDog’s ales. DogTap Brisbane will feature a starting line-up of 28 taps, which will also include non-alcoholic brews.

“Craft brewing in Queensland continues to grow and thrive, and with BrewDog also selling local craft beers and planning collaborations in the future, our industry’s global reputation and reach will only go further,” said Minister for State Development and Manufacturing Cameron Dick.

BrewDog currently exports to 60 countries and has over 90 bars across the world, including DogTap Brisbane, constructed together with local developer NPD Property Group.