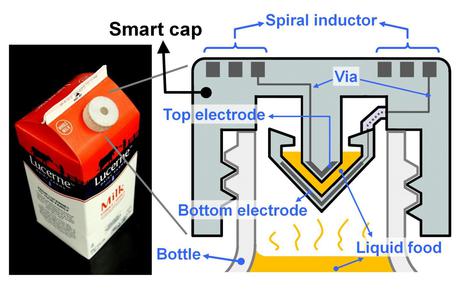 The past decade has seen rapid advances in additive manufacturing technology, resulting in 3D-printed prosthetics, medical implants, toys, vehicle parts, building materials and even food. What had been missing was the ability to produce sensitive electronic components via 3D printing.

But that milestone too has now been passed, with engineers succeeding in 3D-printing electrical components, such as resistors, inductors, capacitors and integrated wireless electrical sensing systems.

And they’ve put the new technology to the test by printing a wireless ‘smart cap’ for a milk carton that detected signs of spoilage using embedded sensors.

The findings, published in the open-access journal Microsystems & Nanoengineering, are the first demonstration of 3D printing for working basic electrical components, as well as a working wireless sensor.

“One day, people may simply download 3D-printing files from the internet with customised shapes and colours and print out useful devices at home,” said senior author Liwei Lin, a professor of mechanical engineering and co-director of the Berkeley Sensor and Actuator Center at the University of California, Berkeley.

The flexibility of polymers has made them popular materials in the world of 3D printing; however, such materials are poor conductors of electricity. To get around this, the researchers built a system using polymers and wax. They then removed the wax, leaving hollow tubes into which liquid metal was injected and then cured.

The shape and design of the metal determined the function of different electrical components. For instance, thin wires acted as resistors, and flat plates were made into capacitors.

To test the electronic components, the researchers integrated them into a plastic milk carton cap to monitor signs of spoilage. The smart cap was fitted with a capacitor and an inductor to form a resonant circuit. A quick flip of the carton allowed a bit of milk to get trapped in the cap’s capacitor gap, and the entire carton was then left unopened at room temperature (about 22°C) for 36 hours.

The circuit could detect the changes in electrical signals that accompany increased levels of bacteria. The researchers periodically monitored the changes with a wireless radiofrequency probe at the start of the experiment and every 12 hours thereafter, up to 36 hours. The property of milk changes gradually as it degrades, leading to variations in its electrical characteristics. Those changes were detected wirelessly using the smart cap, which found that the peak vibration frequency of the room-temperature milk dropped by 4.3% after 36 hours. In comparison, a carton of milk kept in refrigeration at 4°C saw a relatively minor 0.12% shift in frequency over the same time period.

“This 3D-printing technology could eventually make electronic circuits cheap enough to be added to packaging to provide food safety alerts for consumers,” said Lin. “You could imagine a scenario where you can use your cell phone to check the freshness of food while it’s still on the store shelves.”

Researchers have shown that probiotics can support the effect of antidepressants and help to...

Chalmers University of Technology researchers have developed a technology to process a fish into...